ABP is excited to announce we have entered into an agreement to distribute Fanvil Phones and should have stock end of February and a second boat shipment by end of March. ABP was led to Fanvil by the adoption of this brand by both 3CX and Epygi.

Like always ABP has visited their manufacturing and offices in Shenzhen and our technical team has tested their equipment in house and certified as well. ABP has also been involved in recent firmware suggestions that will both fix some issues we found through testing and we got some unique Features / and Functions to added into the latest Android Firmware version of the phones.

Fanvil’s line is concentrated in 3 fundamental models of phones. 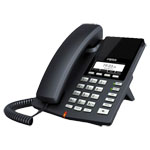 The X3P targets the low end space for single to dual line phones all in one elegant unit with a small footprint. The phone was designed to blend into modern office space, home office and is designed to be wide spectrum use general purpose basic IP Phone with a great price point.

Its GUI is very intuitive, buttons have internationally recognizable icons and screen menus are multilingual.

The X5G unit offers 6 SIP extensions with 8 BLF / Speed Dial buttons with a digital desi strip area. On the interface side it has one Gbit POE Ethernet port and one pass-through Gb ethernet switch port. This phone was designed as a office IP Phone to cover the middle market with its freely programmable BLF with digital display that can scroll over several pages of contacts. The keypad and Telephone User Interface are very intuitive. Buttons are designed with  internationally recognizable icons and screen menus are multilingual.

Fanvil's Video Phone the C600 Android unit is a 7” tablet style phone with 6 SIP extensions, a POE Gb Ehternet port and a Gb Ethernet pass-through port, USB and HDMI ports, Softkey BLF functions, Skype capable, and has an onboard camera.

Here are some of the benefits we found in the Fanvil line that led us to moving forward:

Quad processor,  large high quality display, sensitive and fast touch screen, sufficient power and memory for extra apps together with an elegant phone interface software and unique Fanvil approach to integration with Exchange and Google make this one of the most advanced and unique IP Phone choices in the market.