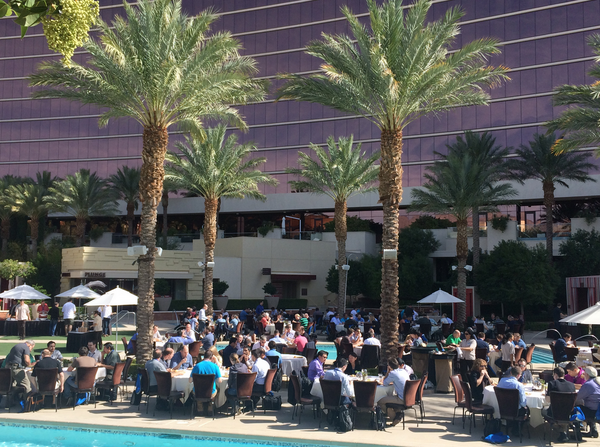 After attending 7 Astricon shows, this might be one the most interesting ones in the last years because of its strong focus on new technology like WebRTC

Overall I felt it gave me a clear view of what may be the future in telecommunications. Last but not least, the meeting confirmed that Asterisk today is a well proven and very robust platform being used around the globe for almost any Telephony application one can think of.

We had beautiful days in Vegas during Astricon 2014 . In between poolside networking, we also made some time for the show's fantastic sessions.

The Exhibitors Hall A lot of activity @ the Digium Booth

Like every year at Astricon, the opening of the exhibit hall was a big event, when everybody enjoyed to be around the crowd. The Digium booth was packed with interested developers asking for information and the booth imparted a lot of expertise from the Digium side. 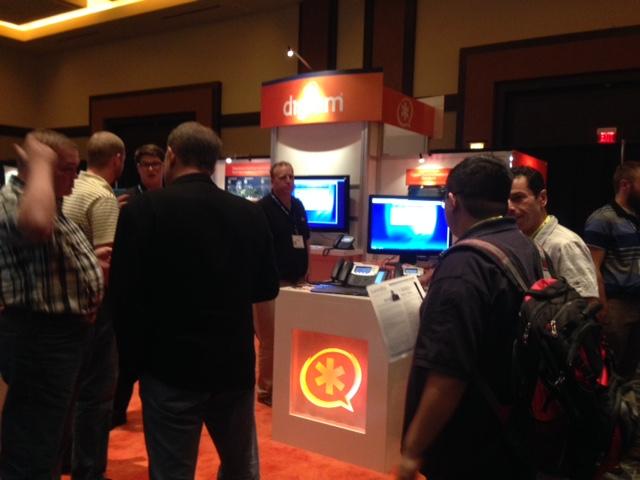 The main focus was Switchvox, plus their phones, but they also had room to exhibit their new high-performance and cost-effective line of telephony cards, which now is completed with their recent addition of the digital TE 236 and TE436, which come in a low profile half length form. At the booth the Digium team was giving everyone a great tip, if you have any trouble remembering the new card name, use Digium's configurator which will make it easier, virtually eliminating the hazard of ordering the wrong card: https://store.digium.com/boards/ Digium also demonstrated the features of the new Switchvox version, which was released only few days before Astricon, and includes a video call panel in the Switchboard. The panel offers a WebRTC video communication between two Switchvox users. For a successful video call, both users need the supported web browser, Chrome 35.x, adequate CPU, RAM, and graphics-display capabilities on the computer and adequate Internet bandwidth.

Digium also shared more news about the new Switchvox app for smart phones that will include a true softphone. We will hear more about this in the coming days...!! 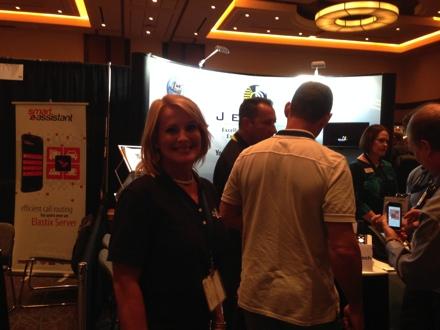 Just in time for Astricon, Digium also announced a new release of DPMA version 2.1 for Digium phones. The big change is the support tying the Asterisk app_voicemail PIN to the phone PIN. This is a important improvement because many users wanted to connect the phone PIN to the regular app_voicemail PIN, but because of the separation between them, no one really wanted to create external monitoring scripts to keep files (voicemail.conf and digium_phone.conf) in sync. By setting the phone option pin equal to “voicemail,” DPMA will instead automatically populate the phone’s PIN with the PIN configured for that user in voicemail.conf. Moreover, if users dial into app_voicemail and change their PIN, DPMA will recognize the password change and will automatically push updated information to your phone, so they are always in sync.

New changes to the Asterisk core were made to facilitate new and better APIs. The Asterisk Community looked at a new interface that will allow those core changes and this is what is called the Asterisk REST Interface (ARI). ARI allows application developers to build rich, custom communications applications in the language of their choice. ARI exposes the raw primitive objects in Asterisk normally reserved for C modules — channels, bridges, endpoints, media, etc. — through an intuitive REST interface. 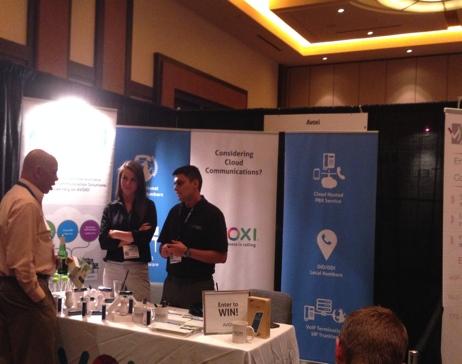 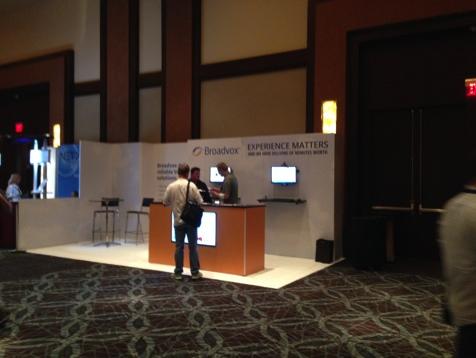 Several IP PBX based on Asterisk 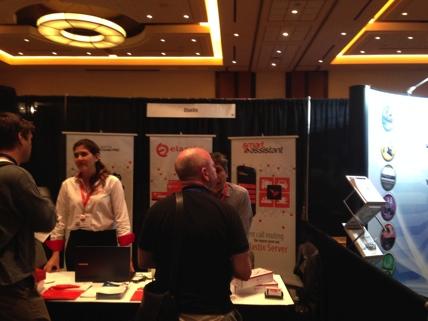 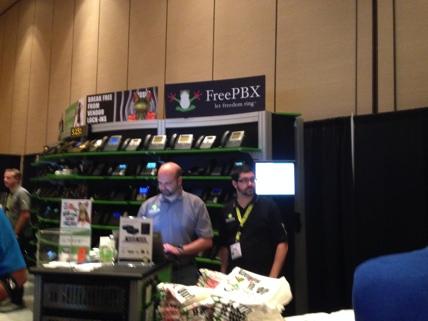 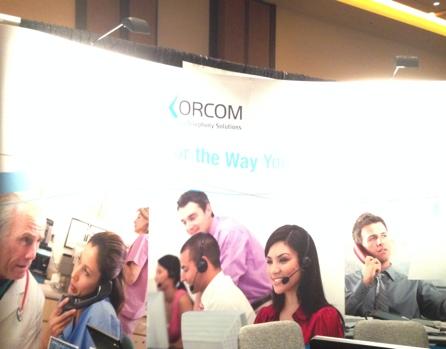 Grandstream and their UCM6510 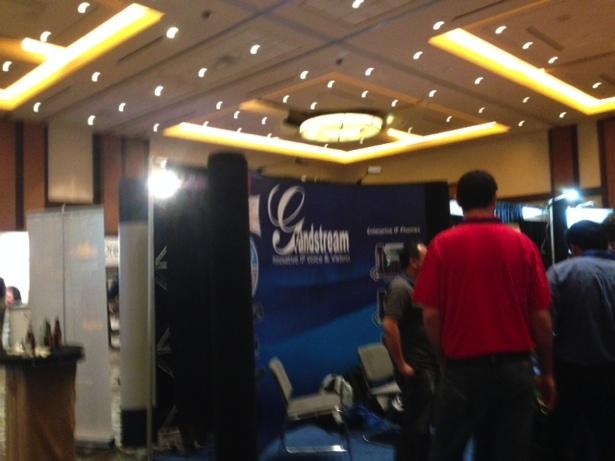 Grandstream was also present at Astricon showing their phones and introducing their new IP-PBX based on Asterisk. This new appliance generated a lot of interest.

Special mention to Respoke from Digium

Due to the proliferation of web technologies such as REST APIs, websockets, and WebRTC, Digium envisions a future where communications is seamlessly integrated into practically all applications, so they introduced Respoke, a new web communications platform built for web and mobile developers that enables incredibly easy to add real-time communications capabilities to the things you build. This platform allows the integration of text chat, audio calling, video collaboration, screen sharing, and peer-to-peer data with just a few lines of JavaScript. So here at Astricon we were introduced to Respoke from Digium, which is an important development for the future.

Other Asterisk related solutions presented too 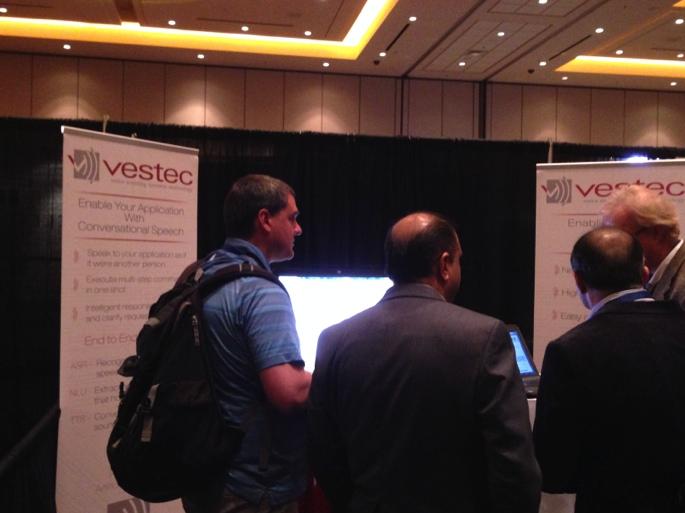 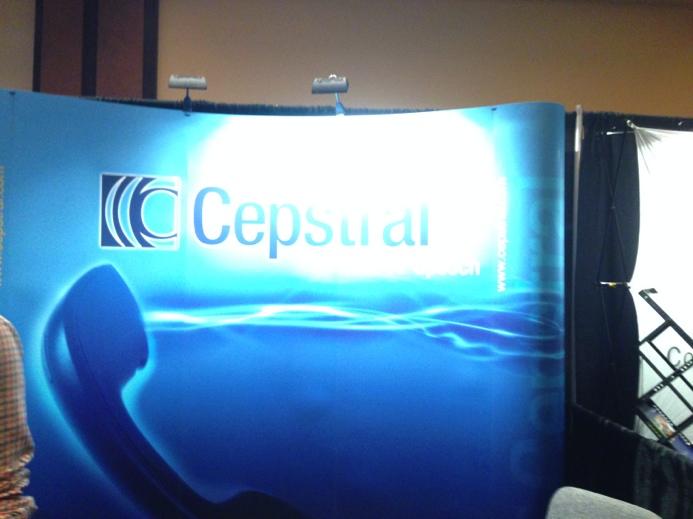 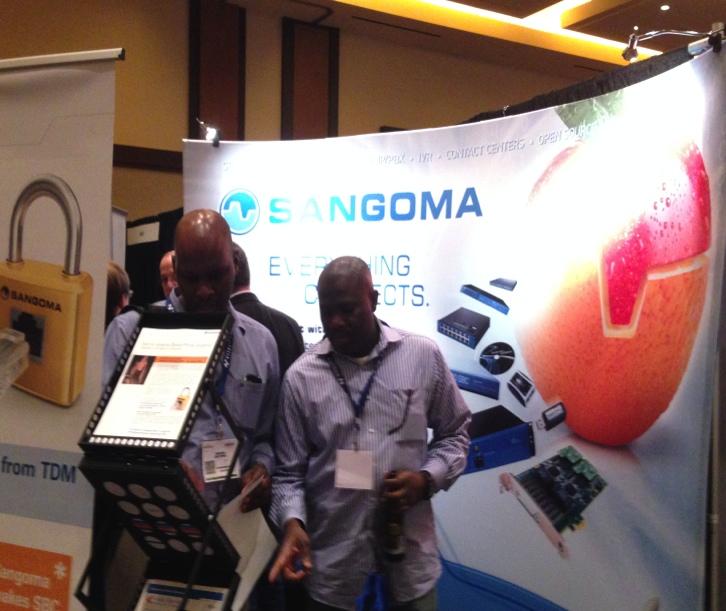 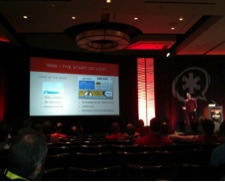 On Keynote Time Craig Walker's CEO at Switch Communications, maker of Switch.co, UberConference and Former EIR Google Ventures, GrandCentral/Google Voice, Dialpad/Yahoo! Voice, delighted as he recounting some of the past on IP Telephony, as well as on future of web communications, highlighting WebRTC. To close his presentation he stated Future of communications? Voice wins. Voice remains key; it is the center of the center"

Security and Fraud Prevention This was an important subject that was covered by various speakers Special Comment to Security and Attacks to IP-PBXs was presented by Eric Klein from GreenFieldTech who answered some important questions like Who is out there looking to attack your PBX? How do they find it? How can you protect your PBX?

Getting the Best of WebRTC Astricon this year is centered on WebRTC, the open project that enables web browsers with Real-Time Communications capabilities via simple JavaScript APIs. To enable rich, high quality, RTC applications are developed in the browser via simple JavaScript APIs and HTML5. The WebRTC initiative is a project supported by Google, Mozilla and Opera. Several speakers talked about WebRTC but the presentation from the Digium specialists Tim Panton and Dan Jenkins caught my attention because it gave us some tools to scale web webRTC deployments, while still meeting the user's needs.

Awesome night at the Cherry Lounge

Nice night around the pool to celebrate an intense two days of presentations. Developers, integrators, service providers, distributors and vendors, all the actors, together around Asterisk, enjoyed a night full of surprises, including the famous Elvis Presley. What would a party in Vegas be without Elvis....! Later on the night was another surprise, the Rat Pack, a tribute show consisted of Dean Martin, Frank Sinatra and Sammy Davis Jr., who relived the best of the 1960s. We had a fantastic time and lot of fun......! 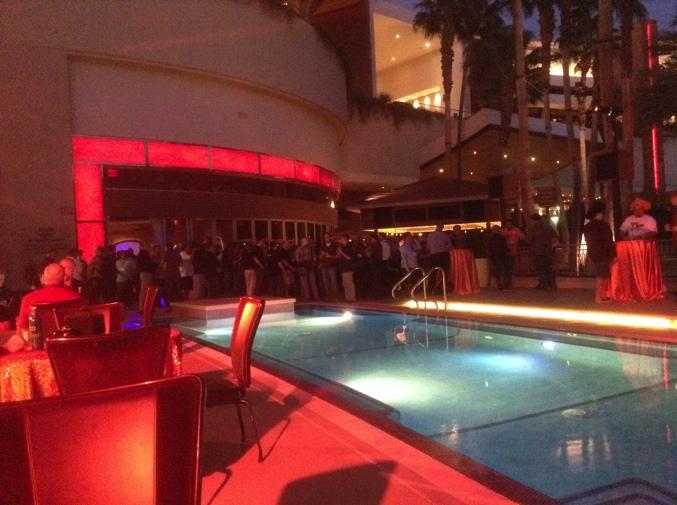 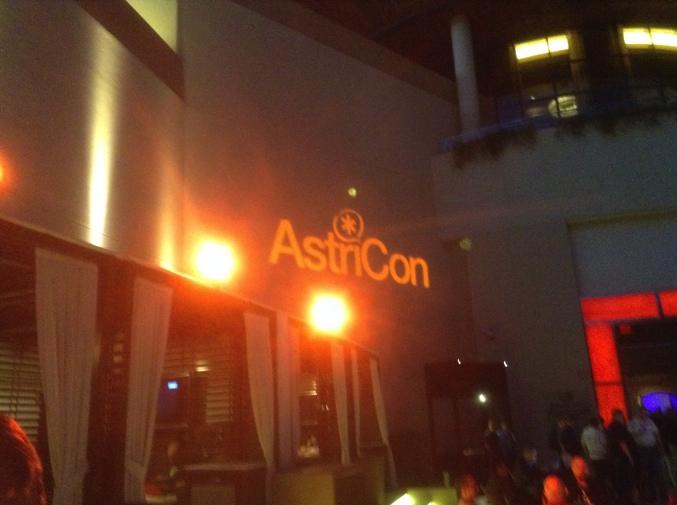 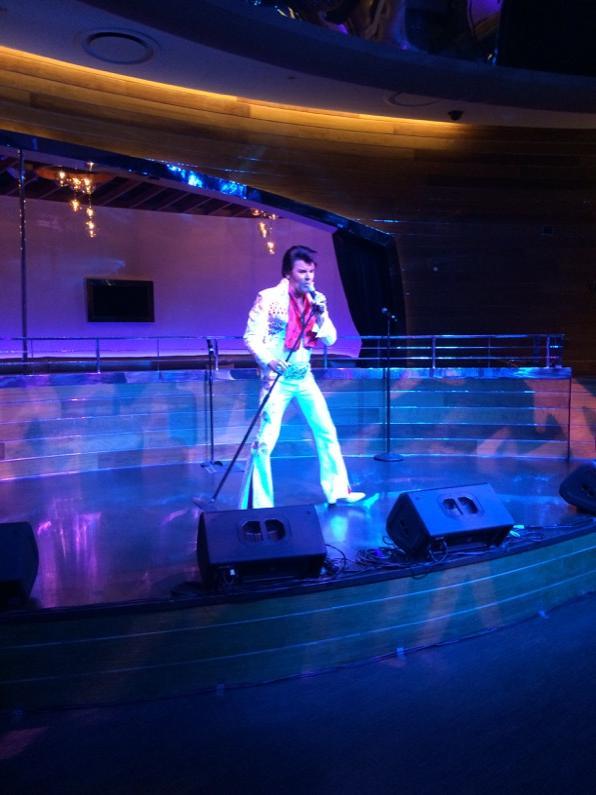 Mark Spencer made the introduction of the keynote speaker, remembering those days when he used to work for Digium. 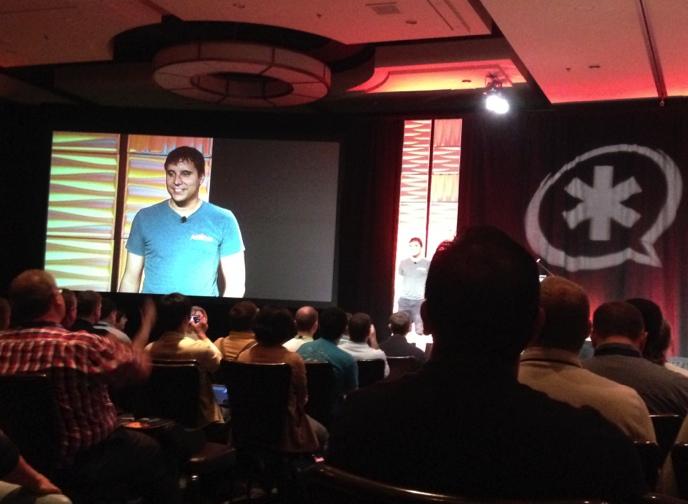 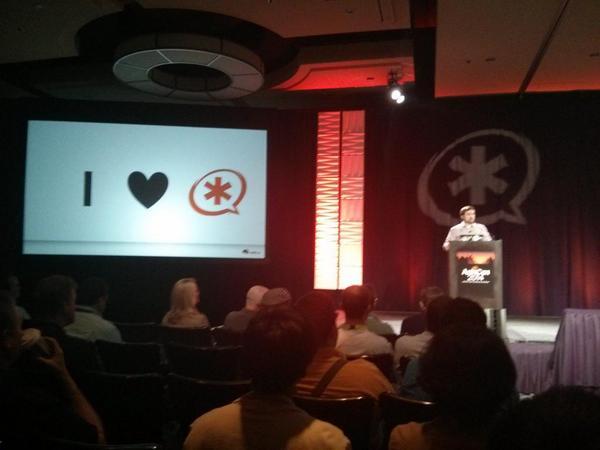 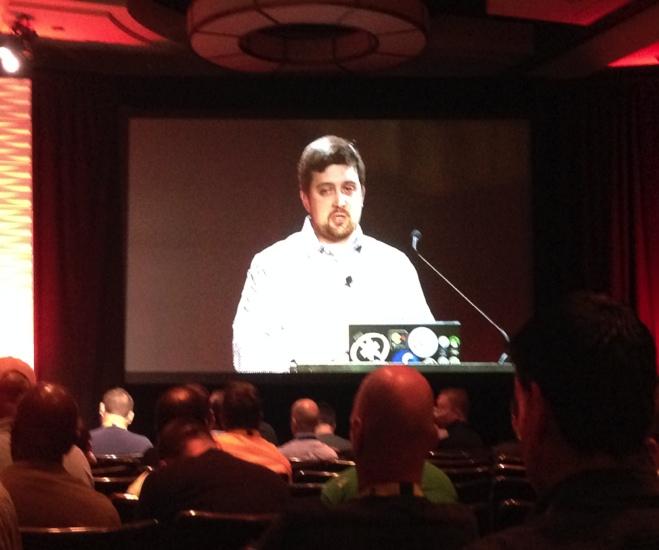 Russel Bryant a Principal Software Engineer at Red Hat and an elected member of the OpenStack Technical Committee started by reinforcing his passion for open source and especially Asterisk. He presented his vision on the future of the cloud infrastructure and its impact on communication. It was beneficial to hear from him about projects like Open Stack. He made a recommendation consisting on 3 basic points: The future of both public and private commuting infrastructure is in the cloud, Openness is an important matter and the Apps should be cloud based. Performance will become increasingly important in the Cloud and introduced a powerful concept of horizontal scaling.

The rest of the day, more about Asterisk in Depth

Here were some of the subjects: Cloud based Asterisk. Call Queues for the Asterisk REST Interface. Integrating Asterisk with a feature-rich browser UI and some important one for my interest: Connecting Non-SIP IP Camera to Your PBX, combining this with WebRTC and 4G-connections, featured by Tom De Moor

Wrapping up. Glances of the Future

There was also "The Asterisk Road Map Session" and more about WebRTC, but the most important session, was regarding the announcement of the release of the new Asterisk version.

It is a Long Term Support (LTS) release to enhance the all your media needs in a fully-featured platform: Its a powerful, configurable PBX with lots of extra built-in features and capabilities but also can be used as a custom media engine for special telephony or voice related business applications, or anything in between. Asterisk 13 represents a clear path for progression in the future with the following innovative new features:

As a final note, WebRTC an effort to bring a defined API to JavaScript into the world of real time communications is supported in Asterisk since version 11, but the passthrough support for the video codec VP8 was only added in Asterisk 12.